Spy Station Special Part 2 & 3 (Web only)
The "Koph" of Germany Jochen Schafer is our special producer for these two parts of the Spy Station Special. In his two shows he features rare recordings of number stations, specialising in German number stations. He also is a talented piano player. Impressive audio from a cassette recorder. These are from April 2005 and whilst accurate at the time some websites mentioned may no longer exist.

Press the arrow (< >) on the player to hear the other track.

Get your special eQSL!
If you were lucky enough to intercept our transmission over shortwave via your own or web SDR radio we have a special spy edition eQSL just for you! 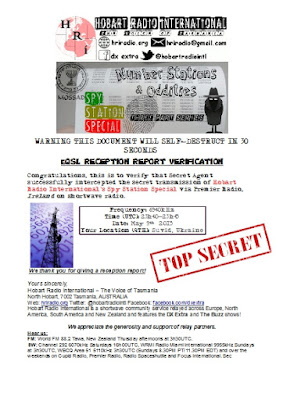 Alien & UFO Special
Welcome to today’s special show. Ever since the 1947 Roswell spacecraft crash many people around the world wonder if their is life beyond earth. In 2013 an American survey found 50% of people believe we are not alone. In the next 30 minutes we’re looking into the truth about Aliens and UFOs. Are Aliens and myth or fact? Are most UFO’s flying saucers? Are crop circles faked? And are Alien abductions authentic?
LISTEN via embedded player:DOWNLOAD | TWITTER | FACEBOOK | TRANSCRIPT

Show No.16
On today’s show feature a World Music Special. Our challenge - to play music from every continent of the world. Sounds easy? Antarctica is one of the continents included! This special broadcast is only airing on WRMI 9955kHz and WBCQ 5110kHz 3h30-4h00UTC this Sunday.
(Saturday 11:30-Midnight PM ET)