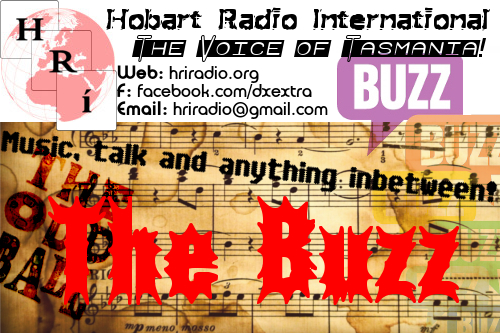 Show No.14
On today’s show we welcome a new segment of satire news, how to survive a zombie attack, comedy from Fawlty Towers, showcase some odd shortwave pirate stations and as always great music.

Arrrrrr! Did you like hearing the odd and wacky pirate stations from the USA at the end of our show? You can find more of them from here and here but NOT here.

Posted by Hobart Radio International at Thursday, August 27, 2015 No comments:

From Hobart, Tasmania, Australia - welcome to the DX Extra. It’s a show about the shortwave and radio hobby featuring news, reviews, pirate radio and anything in-between. We’re on shortwave and also as audio on demand.

Posted by Hobart Radio International at Thursday, August 20, 2015 No comments:

You can catch the DX Extra on Channel 292, WRMI and WBCQ this weekend!
Posted by Hobart Radio International at Monday, August 17, 2015 No comments:

Spy Station Special Part 1
In this special show we’re unraveling the cold spooky truth of a shortwave number station. We will cover undercover agents, past and present number stations and the rise of Asian number stations.

Spy Station Special Part 2 & 3
The "Koph" of Germany Jochen Schafer is our special producer for these two parts of the Spy Station Special. In his two shows he features rare recordings of number stations, specialising in German number stations. He also is a talented piano player. Impressive audio from a cassette recorder. These are from April 2005 and whilst accurate at the time some websites mentioned may no longer exist.


Press the arrow (< >) on the player to hear the other track.


Get your special eQSL!

If you were lucky enough to intercept our transmission over shortwave via your own or web SDR radio we have a special spy edition eQSL just for you! 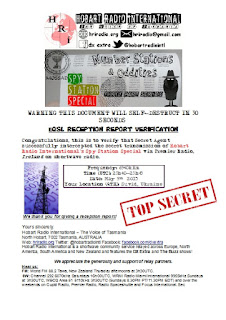 Shortwave Reception:
We've been featured in the Bulgarian DX Blog and they've also added our schedule.

We've already had an overwhelmingly positive response from listeners;
"I really look forward to the next 2 parts online! I must admit I really enjoyed listening to it from start to finish it was very interesting and I learnt a lot about Asian number stations in particular." Jordan, Northern Ireland.

"Superb documentary on this mysterious subject. For those who don't know anything about this topic, it should be an eye opener, indeed. Anyway, I really enjoyed this part and will listen to the others on your site. Top notch work that I would say was of the quality that would have been presented on the all time greatest DX program, the old Radio Nederlands' Media Network with Jonathan Marks. Slap yourself on the back!" Al, New York, USA

"Good program about this subject. Was very interesting, especially the stations from China that you show at last." Claudio, Chile.

Posted by Hobart Radio International at Thursday, August 06, 2015 No comments: